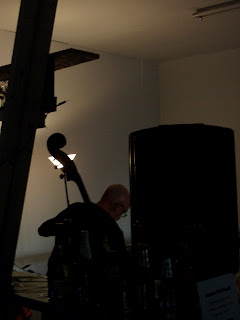 Gus Garside [the other half of The Static Memories]. 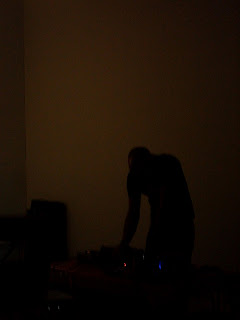 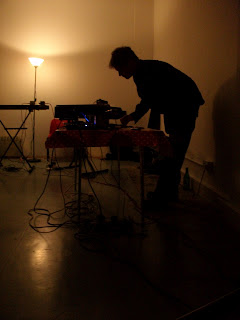 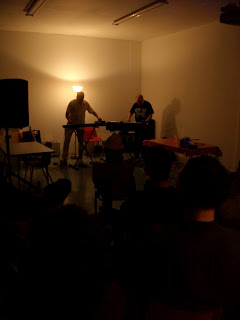 Posted by aural detritus at 14:50 No comments: 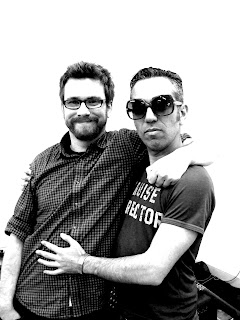 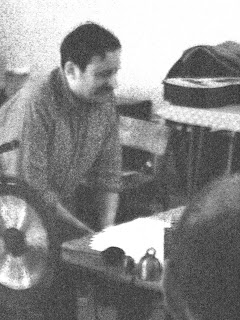 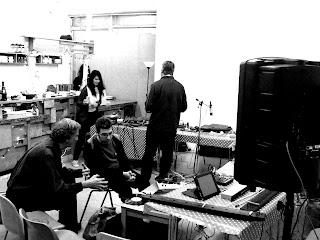 Posted by aural detritus at 14:39 No comments: 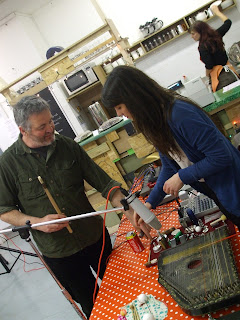 Michael Fairfax [half of Gimlet-Eyed Mariners] and Dimitra Lazaridou-Chatzigoga. 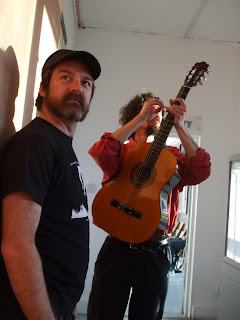 A couple of Bolide. 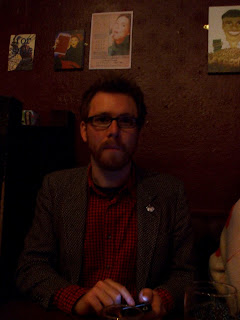 Posted by aural detritus at 14:12 No comments:

Take a peek at Joseph Young's Super 8 promo film for the new Gold Dust compilation on The Slightly Off Kilter Label:
https://vimeo.com/38031079 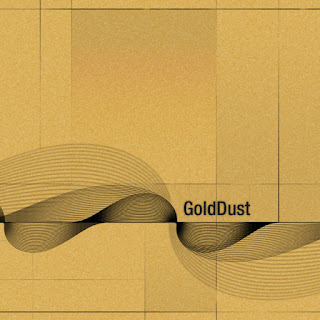 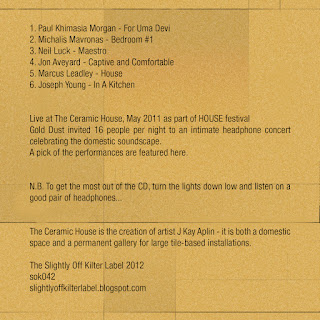 Posted by aural detritus at 07:31 No comments:


Gimlet-Eyed Mariners
Gimlet-Eyed Mariners hail from Somerset and were formed to create the kind of soundscapes its members enjoyed, but seldom heard. Although they arrived at it from different directions, the Mariners share a vision and a common admiration for musique concrete & electronic music pioneers like Pierre Schaeffer and Karlheinz Stockhausen. They are also inspired by the traditions of Improv (and Stockhausen’s “Intuitive Music”). They aim to bring together these two streams, which may at first glance seem incompatible, in a way few artists have done previously. Their music is totally improvised, concerned primarily with colour, texture, dynamics and the organic, unpredictable evolution of each performance. Each piece starts from scratch: the opening moments of an improvisation constitute the only negotiations that shape the performance. Michael Fairfax, a sculptor and designer, studied under his grandfather, Ernest Berk, a pioneer of musique concrete, and has created a number of sound-works using computer technology. Improvisation allows him space and expansiveness that is the antithesis of public art. He has recently been making his own homemade instruments. Barry Witherden, a freelance music journalist, began tinkering with low-tech, tape-based collages in his late teens. He has a particular interest in the more meditative sub-genres of Improv, which value space, resonance and texture.

Paul Khimasia Morgan
For many years, Paul Khimasia Morgan has been developing his approach to improvised music and has worked on projects with Simon Whetham, Daniel Jones and Adam Lygo. He has releases on Con-V, Engraved Glass, Cronica and The Sound Projector. Paul also runs the imprint; The Slightly Off Kilter Label, which publishes artist-led short-run vinyl and cd-r editions. The newest batch of releases include work by Daniel Spicer, Bolide, Noteherder & McCloud and a compilation of recordings from Joseph Young’s exclusive 2011 headphone concerts entitled Gold Dust.. Paul Khimasia Morgan is the curator of aural detritus concert series.

Daniel Jones
Daniel Jones is an improvising musician based in Brighton, England. One third of the group Loris, (with Patrick Farmer and Sarah Hughes), and an ex-member of Tierce, (alongside Ivan Palacky and Jez riley French), he has had music released on the Another Timbre, Cathnor, Engraved Glass and Roeba labels.

Dimitra Chatzigoga-Lazaridou
Dimitra Lazaridou-Chatzigoga (Greece) is a musician and a linguist currently based in London. Active in the field of experimental, electro-acoustic and improvised music, she started to play in Barcelona in 2006. She plays the zither, an old folk instrument, and remaps its territory, treating it as the interior of the piano and a resonance box, by making use of various objects detached from their typical usage. She performs solo, in long-term collaborations (with Ferran Fages as ap’strophe) or in occasional formations (with Lucio Capece, Angharad Davies, Axel Dörner, Franz Hautzinger, Robin Hayward, Chris Heenan, Grundik Kasyansky and Tisha Mukarji among others). She has participated in international festivals such as Pied Nu in Le Havre, TOT 1.0 in Athens and Personal and Collective in Ljubljana. She has two CDr releases, ‘paisatges’ with Felipe Araya-Muñoz (Kukuruku Recordings, 2009) and ‘der schlaue fuchs’ with Chris Heenan (More mars, 2011) and two CD releases with the duo ap’strophe, ‘objects sense objectes’ on Etude Records (2009) and ‘corgroc’ on Another Timbre (2010). Her first solo CD ‘stroke by stroke’ was released in 2011 by Organized Music from Thessaloniki. ‘Outwash’ with Tisha Mukarji (inside piano) and Angharad Davies (violin) is soon to be released on Another Timbre.


Daniel Spicer
Daniel Spicer is a writer, broadcaster and improviser based in Brighton. He is a regular contributor to The Wire and Jazzwise magazines. He presents a weekly radio show, The Mystery Lesson, on Brighton's Radio Reverb 97.2FM, playing new releases in avant-garde improvised music. He is a member of the chaotic Brighton-based electro-acoustic improvising sextet, Bolide. Daniel also performs solo works of sound poetry, spoken word and improvisation. In 2012 he releases a second CD on The Slightly Off Kilter Label; a tape in the Voice Studies series curated by London-based publishing house and tape label My Dance The Skull; and a chapbook of new poetry on the Chocolate Monk label.

Joseph Young (The NeoFuturist Collective)
Joseph originally trained as an actor and performed in theatre and television for over 25 years. Since completing a research MA in 2005, he has developed a body of sound and performance work for galleries, the public realm, radio, film and the internet. Joseph’s work has been seen at Tate Modern, as part of the Futurist retrospective in 2009, where he co-authored and led a choir to shout at the paintings. In 2010, he was artist-in-residence at Blast Theory, in which he developed a solo installation project subsequently realised at a&e gallery in Brighton as The End of Listening. In 2011, he was the performance director of The Red Shoes for Secret Cinema in London. His sound installation, Base Sound :: Sonic Gold was commissioned as part of the HOUSE festival in May 2011 and featured a series of intimate headphone performances with invited artists, including Paul Khimasia Morgan. The resulting CD “Gold Dust” has just been released on The Slightly Off Kilter Label.
Joseph is currently Vice Chair of the AIR Council (Artists Interaction & Representation) and founder of The NeoFuturist Collective, an artists’ group dedicated to celebration of urban noise.
http://www.josephyoung.co.uk/ www.neofuturist.org twitter: @artofnoises

Simon Drinkwater
Simon Drinkwater is at the moment exploring polyphony. He uses voice as the sole sound source and relays it through both tape and digital delay; using the digital on a long slow decaying loop which picks up microtonal mumblings and forms them into undulating swathes of choral drone, reminiscent of Ligeti's Lux Aeterna. His improvisations incorporate shifting chord changes, feedback and rhythmic fragments of psycho-babble sound poetry. Simon also plays improvised music on the harp.


Mystery Dick [Ed Pinsent & Harley Richardson]
Mystery Dick are Ed Pinsent and Harley Richardson, two artists/musicians from London. The duo was formed in 1995 and plays very sporadically; there are almost no available releases. Ed Pinsent is a digital archivist by day, by night the editor of The Sound Projector, a magazine covering unusual and visionary music as well as other noise ignored by the mainstream press. Ed presents a weekly radio show on Resonance FM. Ed is also a cartoonist, creator of surreal, whimsical and avant garde comic strips. In the 80's Ed was a small press publisher, putting out many of his own titles as well as the influential Fast Fiction anthology.
Harley Richardson is a musician, writer, artist and a prolific doodler. He contributes reviews and illustrations to The Sound Projector and used to run the TSP website. In the late 1980s he edited Ugly Mug, an anthology of British underground comic strips. Having failed to ferret his way into The Fall, he plays musical improvisations with various impromptu gatherings of friends from Walthamstow and is a guest musician on several recordings by North London songsters The Original Beekeepers.

Adam Lygo
For this performance I am going to focus on the concept of contact and the effect of various vibrations influencing & mutating during the performance time. I will use no guitar, effects or loops instead various items of glass, metal & shell will be manipulated using three vibrating devices and in direct contact to a Zoom HR4 fed to the mixing desk.

The Static Memories
Dan Powell & Gus Garside have been working together on improv project The Static Memories for the last four years. Dan Powell (laptop/guitar/sampler/effects) began making sound for installation works in London in the mid 90's and was involved in live arts group OMSK. Since moving to Brighton in 2000 he has concentrated on experimental and improvised music. He is a member of Brighton based collective The Spirit of Gravity and has performed at spaces across the UK. Dan is currently also a member of free improv duo Nil with Chris Parfitt. Dan has released work on net labels Hippocamp & Wrong Lab and his work has been played on WFMU, Radio Reverb & BBC Radio 3. Gus Garside (double bass/electronics) has worked in a variety of musical settings – jazz, contemporary music, pop, cabaret, dance, theatre and, most importantly, improvised music where he has performed with many leading players. Gus formed arc in 1988 and their third album "the pursuit of happiness" was released on Emanem Records in 2009. He formed In Sand in 2004 and their first album “Whatever” came out mid 2008. Gus is part of the Brighton Safehouse collective.
“…where he differs from the average jazz bassist is in the range of sonorities he conjures from his instrument”” - Penguin Guide to Jazz on CD
http://www.http//soundcloud.com/dan-powell www.myspace.com/doublebassandelectronics

Slow Listener
“Slow Listener sounds like the burnt-out remnants of Ubik found in an old film canister. No I don’t know what that means either but I can’t think of any other way to describe something so bloody strange.”
-Jonny Mugwump Exotic Pylon