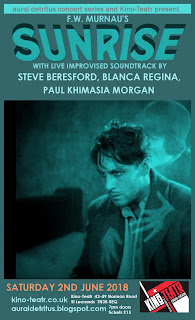 A married farmer falls under the spell of a femme fatale from the city, who tries to convince him to drown his wife, but desperation and turmoil ensues…

Sunrise deals with risqué themes such as obsession, temptation, lust and ultimately, redemption.  A naïve countryman living an idyllic, bucolic lifestyle with his wife and their young child.  The serenity is shattered when a beautiful femme fatale from the city enters his life.  He soon falls in love with her, aware for the first time that there may be more to the world than the life he has settled for.  As their secret passion intensifies, the femme fatale convinces the countryman to kill his wife so they can be together forever.  The countryman is then forced into a nightmarish decision…
Murnau was given complete artistic freedom by his financier William Fox and he took full advantage.  Sunrise is full of cutting edge special effects, mammoth sets, and a feeling of experimentalism that doesn’t get in the way of the narrative.  Fox’ investment paid off; at the very first Academy Awards in 1928, Sunrise won three Oscars; for Unique And Artistic Picture, Jane Gaynor won Best Actress, and Charles Rosher and Karl Struss for their ground-breaking cinematography.

Steve Beresford is a well-known member of the London improvising scene since the 1970s.  He has featured on a large number of recordings of improvised music and been involved with Alterations, Imitation Of Life, Derek Bailey’s Company events and with the Portsmouth Sinfonia.  Beresford has continued to play free improvisation with a number of prominent musicians including Evan Parker, John Zorn and Han Bennink.
Blanca Regina is an artist, teacher and curator currently involved in creating audio-visual performances, sound-works, installations and film.  Her research and practice encompass sound art, free improvisation, moving image, live events, electronic music and performance.  She is co-founder of the Live Cinema Foundation.
Paul Khimasia Morgan is an improviser drawn to working with unorthodox instrumentation and technique.  He has worked in collaboration with Dan Powell as Brambling, and with sound artists Simon Whetham, Michael Fairfax and Joseph Young. His latest solo cd was released by Confront.  He curates Aural Detritus Concert Series, manages The Slightly Off Kilter Label and writes for The Sound Projector.
Posted by aural detritus at 04:49 1 comment: