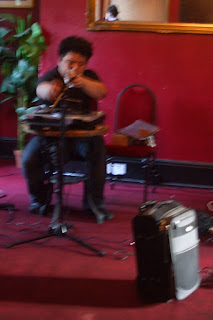 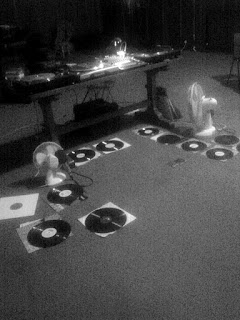 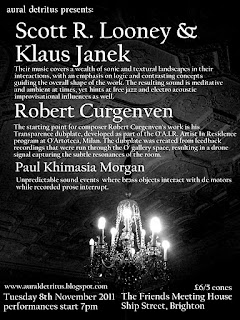 Their music covers a wealth of sonic and textural landscapes in their interactions, with an emphasis on logic and contrasting concepts guiding the overall shape of the work. The resulting sound is meditative and ambient at times, yet hints at free jazz and electro acoustic improvisational influences as well.

The starting point for composer Robert Curgenven's work is his Transparence dubplate, developed as part of the O'A.I.R. Artist In Residence program at O'Artoteca, Milan. The dubplate was created from feedback recordings that were run through the O' gallery space, resulting in a drone signal capturing the subtle resonances of the room.

Both performances will feature the venue’s Grand Piano.

Plus an additional performance by

A fantastic and surreal evening of improvisation from south koreans HONG CHULKI and CHOI JOONYONG on wednesday night! Thanks to everyone who came along, particularly Richard Pinnell who drove all the way from oxfordshire and then very kindly wrote this review:

support came from the trio of PATRICK FARMER, DANIEL JONES & STEPHEN CORNFORD whose three (3) tables-worth of electronics, turnatbles and objects was easily the biggest performers' set-up of equipment we've ever seen at aural detritus, and myself, PAUL KHIMASIA MORGAN which should have been composed of 15 minutes of me coughing a lot due to illness but luckily for the audience, (and me), wasn't.

but here's the bare bones of the koreans' set from Richard's review:

"There then followed a set by two of the Korean musicians involved in the Seoul-based Balloon and Needle organisation, Choi Joonyong and Hong Chulki. Having long been a fan of their music, I was blown away by their live performances in London early this year, which leant towards a more inclusive, maybe theatrical manner of performing that extended beyond the purely aural. Last night’s duo set continued in the same vein, and was a remarkable performance. They began with Chulki sat behind his turntable in the centre of the room, letting it spin and applying small pieces of metal to its edge, the lids from baked bean tins or something similar, so creating a thin, squealing sound that thickened and thinned as he crouched over it, carefully retaining the same sound by holding his hand steady. He did similar things with various other objects, sheets of thin metal and a small transistor radio, which he allowed to spin around on the turntable, its blast of detuned white noise flicking on and off as the speaker turned to and ‘fro. After they had done this for a while, Joonyong set off with a roll of aluminium kitchen foil, initially cutting off lengths of it as he wandered about the small room, dropping them as he went. Then, much to the amazement of the audience, he climbed on a spare seat amongst them and began to tape these lengths of foil to the blades of the currently switched-off ceiling fan. He then went over to the wall switch and turned the fan on, slowly at first, increasing the speed so that the streams of foil fluttered around, creating a very satisfying whirr that complimented the similarly circular sounds from Chulki’s turntable. Joonyong also then tried to do something similar with a small electric fan mounted high on one wall, but here the intended stream of foil failed to work, and instead we watched him studiously trying to push the foil in to the machine so as to create a sound, settling for a deep rumbling in the end.
Then Joonyong wandered off out of sight, but I kept track of him in a mirror as he opened and closed a window at the far end of the room, so letting the sound of the pub garden below flood in and out. Then as Chulki sat motionless and focussed, continuing to produce sounds in the manner we have come to expect from a musician, Joonyong began to place several of his modified portable CD players around the room, some on the chairs amongst the audience, each doctored so that the disc span even with the lid removed, and each producing whirring, clicking sounds as bits of paper, little screwdrivers and other odds and ends were stuck or rested against the discs as they rotated. Then, as we were all sat completely engrossed, he went to his mixer and sent a low roar through the room’s P.A, before he got up and, picking up one of the weighty speakers, he opened a door and took it out onto the narrow balcony overlooking the street below, leaving it outside, facing in, but with the door shut. He then took the other speaker out of the room through onto the landing outside, closing the door behind him as he returned. He then adjusted the volume now and again, reminding us that the speakers were there, and using the doors themselves to adjust the sound coming into the room. Finally, returning the speakers to the room, he turned a microphone towards Chulki, who had until now played entirely acoustically and for a few short blasts amplified the sound back to the audience before gradually the duo set about turning everything off, ending with the blocked-up wall fan to finish the performance."

Posted by aural detritus at 06:44 No comments: 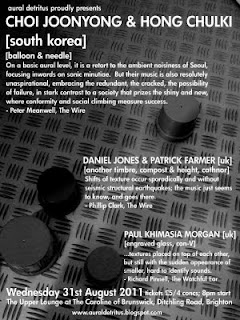 Organised by Joseph Young as part of Open Houses/Brighton Fringe Festival.
Posted by aural detritus at 09:05 No comments: 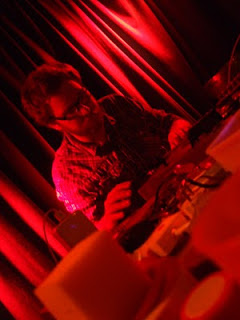 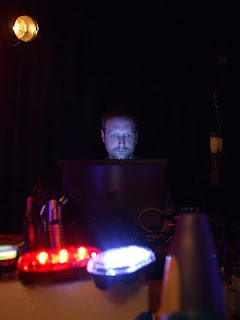 daniel and simon taken at komedia show in brighton 31 march 2011.
Posted by aural detritus at 08:31 No comments: 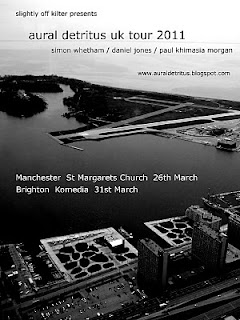 Ongoing throughout 2011, collaborative and solo performances from Simon Whetham, Daniel Jones and Paul Khimasia Morgan around and about the UK. Starting with Manchester St Margarets Church (tbc) (26 March), Brighton Komedia (31 March).
Posted by aural detritus at 03:53 No comments: