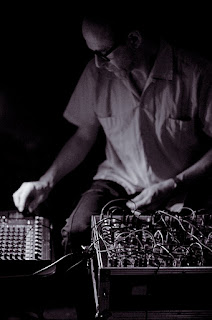 Jason Kahn was born in New York in 1960 and grew up in Los Angeles. He moved to Europe in 1990, first living in Berlin until 1999 then moving to Switzerland. He is currently based in Zürich.
Kahn came of musical age in the late 1970's, playing drums in punk bands and later making many records for the Los Angeles-based SST label. He turned more to improvised music in the late 1980's, culminating with his move to Berlin where he spent many years playing as a drummer and percussionist in different projects of improvised music, as well as being a member of American composer Arnold Dreyblatt's group “The Orchestra of Excited Strings.”
In Berlin Kahn began working with electronics and composing. He started releasing solo CD's in 1998 on his Cut imprint, which ran from 1997 until 2007. Kahn also began exhibiting sound installations in 2001 and has since shown numerous works in museums, galleries, art spaces and public sites around the world.
Kahn collaborates regularly with many musicians, both in improvised settings and in the context of graphical scores which Kahn composes for specific groupings of players.
This will be his first tour of the UK.
http://jasonkahn.net/

“There is no more protean improvisor in experimental music today than Jason Kahn.”
--The Wire

Following exhibitions of his sound/art work at SOMA Contemporary Gallery in Waterford, Ireland, Milton Keynes' MK Gallery and participating in the Gorey Arts and Film Festival, we are proud to welcome Phil Julian (aka Cheapmachines) to Brighton. Phil has recently released work on En'tracte, Void Seance and Obsolete Units.
http://cmx.org.uk/
Phil Julian will be performing in duo with Brighton's own Daniel Jones who is a member of Loris, (another timbre) and has a solo release of his improvisations "When On And Off Collide"available on Cathnor.
Support from Paul Khimasia Morgan (con-V, engraved glass).


Posted by aural detritus at 10:04 No comments: