Concert two; this is the halfway point, and already something's different.  The action takes place in the Phoenix' main Gallery this evening, giving everyone, performers and audience, a bit more elbow room and offering a more polished presentation.  After a quick introduction, and his first poem of the evening (a version of Spood I think, from his album engruntled), Daniel Spicer urged the audience up off their seats and into an ante-room at the back of the Gallery to watch me, Paul Khimasia Morgan.  I feel a bit strange attempting to review my own performance, (partly because I don't remember much about it), so all I'll say is this: shortwave radio, mobile phone recordings and amplified bicycle lights in pitch darkness. 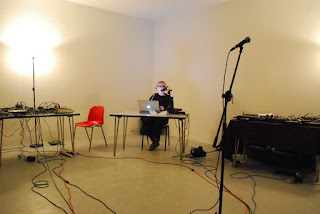 Next up was London-based sound artist Iris Garrelfs who produced an impressive set of real-time vocal manipulation/improvisation from behind her laptop.  Dense backgrounds were set up, occasionally producing a very effective sub bass effect, over which Iris spun a wordless filigree. Such was the power of her bass soundforms, a large bough fell from an elm outside, visible through the Gallery's plate glass windows during Iris' set*.  The resulting sonic landscape moved interestingly in and out of vaguely esoteric territory (at least to my mind) which I enjoyed; but the thing that stays with me is the extremely high quality signal Garrelfs produces which allows the nuances of her manipulations of her trained voice to hit their marks, without an audible residue of whatever software she was using to do the processing. 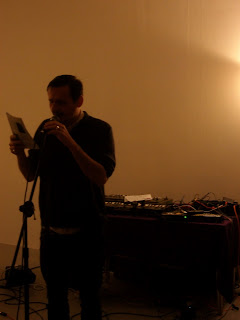 More poetry from Daniel Spicer, before an intermission, and then the Oxford/Bristol based Stephen Cornford and London based Greek owner of the label Organised Music From Thessaloniki; Kostis Kilymis. 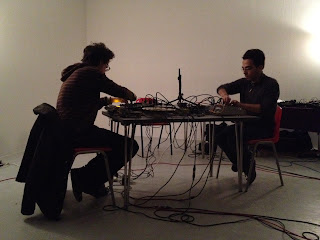 Quite a surprisingly full and full-on sound from these two young improvisors tonight; both men armed with a table full of wires, devices, objects, bits of metal, boxes and who knows what.  Pulsing electronics, droning hums, skittering noise-shards all produced with gusto and at volume; a far cry from the sometimes delicate and sedate world of lower-case improv.  Kilymis has worked with a who's who of  international avant names both solo and through his label, while Cornford participated in the Soundfjord residency at  V22 / The Biscuit Factory in South London this summer with Patrick Farmer and Lee Patterson.  Their pedigree shows.  Marvellous stuff. 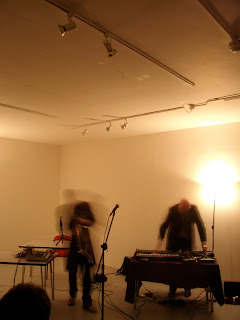 Rounding up the evening were the rather dapper saxophone and electronics duo Noteherder & McCloud; also known as Chris Parfitt and Geoff Reader.  Having selected from a choice of two horns tonight, Parfitt set about utilizing the acoustic properties of the space in tandem with his usual habit of feeding a signal to Reader's electronics set up.  Reader himself prefaced their set with a brief apology regarding one of his keyboards which had appeared to have reverted to its factory presets, but to me, this was to their advantage, making them (consciously or unconsciously) seem to work harder.  This improvisation was one of the best ones I've seen them do, Parfitt's processed sax reminding me of  Nik Turner at times (in no way a bad thing) and with Geoff Reader providing plenty of momentum with his churning synths and distorted vocalising.  Two new releases from these guys; one on Exotic Pylon and the other from The Slightly Off Kilter Label coming very soon - I'd advise you very strongly to seek them both out, judging by the calibre of work the boys demonstrated tonight.

Big thanks to the staff of Phoenix Brighton, and the adcs team: Simon Drinkwater, Holly Jarvis, Adam Lygo and Daniel Jones.

* note:  it was quite windy last night.

Posted by aural detritus at 22:39 No comments: 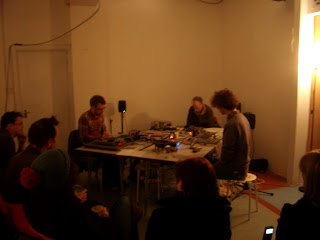 Very pleased with the excellent music on offer last night at our first show of november at Phoenix Brighton.
MASS, a duo of dark clad gentlemen, started the evening off with a linear set of tone development interspersed with what appeared to be some kind of homemade breath operated instrument heavily time-processed I'm guessing.  Apart from that, I'm not sure exactly how their sounds were being produced, but an absorbing set with an esoteric undercurrent, perhaps.
Breath continued as a theme as the great bass saxophonist Tony Bevan followed with a highly technical, and physically demanding by the looks of it, solo display.  Bass sax is an unusual instrument in jazz and Mr Bevan is, to my ears, the top exponent in the UK if not everywhere.  He even demonstrated his technique (don't forget - a bass sax is a not inconsiderable-sized object) of playing with the mouthpiece full of water for a lucky few of us in the bar prior to doors opening. 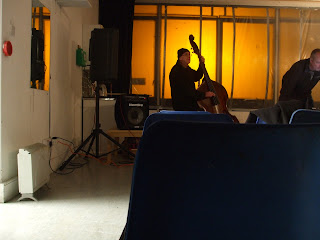 The Static Memories (double bassist Gus Garside and electronics/guitar man Dan Powell) reprised their set at adcs in May with another extremely enjoyable performance rich in textural and gestural detail.  I really like the collision of a jazz career and experimental electronics of this duo.
After a short interval, we all decamped into the bar to witness the trio of Patrick Farmer, David Lacey and Daniel Jones and their tabletop devices.  Self-amplified by a means of a small speaker each, they first set some noises running for ten minutes, slowly increasing in quiet intensity, as the audience finished ordering drinks.  We all then seated ourselves and the trio commenced a score by Sam Sfirri.  This seemed to contain a good deal of "silent" passages which really focussed the audience, so much so that I felt I had to politely shoo some audible conversationalists out of the next room.  A further fifteen or so minutes of pure improvisation followed in more exuberant fashion to finish the evening to great appreciation.
I must also thank Daniel Spicer, he of jazz writings and his own Mystery Lesson radio programme, for his poems and announcements throughout the course of the evening.
Next Thursday; Iris Garrelfs, Stephen Cornford, Kostis Kilymis, Noteherder & McCloud and myself will be entertaining in the Phoenix main Gallery from 7:30pm.  All welcome...
Posted by aural detritus at 09:44 No comments: