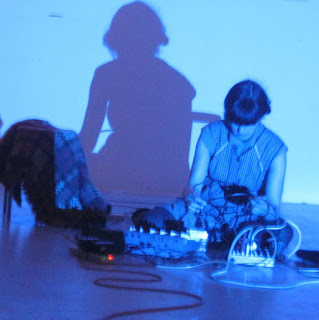 All of us at Aural Detritus are very sad to hear of the passing last month of Rowan Forestier-Walker who performed and recorded under the name Embla Quickbeam.

Jez riley French has written about her work here:

In November 2020, Rowan contributed her piece "to the centre" to the "JOY Of Isolation" cassette release.  Originally intended to be a series of performances at Brighton's Ceramic House art  gallery, due to the pandemic this project became a file-sharing exchange with all artists producing material for it remote from each other.  Rowan transformed household sounds from her kitchen into an intriguing soundworld as if by an alchemical process.  She performed a beautiful solo set at Aural Detritus Concert Series microfestival at Phoenix Brighton in June of 2013, and I performed on the bill with her at Simon Whetham's Active Crossover at Sanctuary Cella, Hove in February 2010.  I first met her when she performed with her friend Aimie as Walpurgis Night in February 2007 at a Slightly Off Kilter event with Lee Patterson & Jez riley French I organised at Westhill Hall in Brighton.  I think this would have been around the end of the improvising group Leopard Leg which she was a part of.  The pair produced interesting, well thought out work; and I was impressed by the beauty and sophistication of their music.

Although I did not know her in a social sense, I know she was well-known and well-liked in the Brighton musician's community and further away.  Her sound practice, being a sensitive amalgam of field recording and tape music, drew many admirers.  For a while she co-ran The Magic City record shop in Todmorden.  In my experience, she was always friendly and easy to work with in a professional sense, and I always found her work to be unique and absorbing.

Our condolences to her friends, family and husband.

Posted by aural detritus at 02:50 No comments: