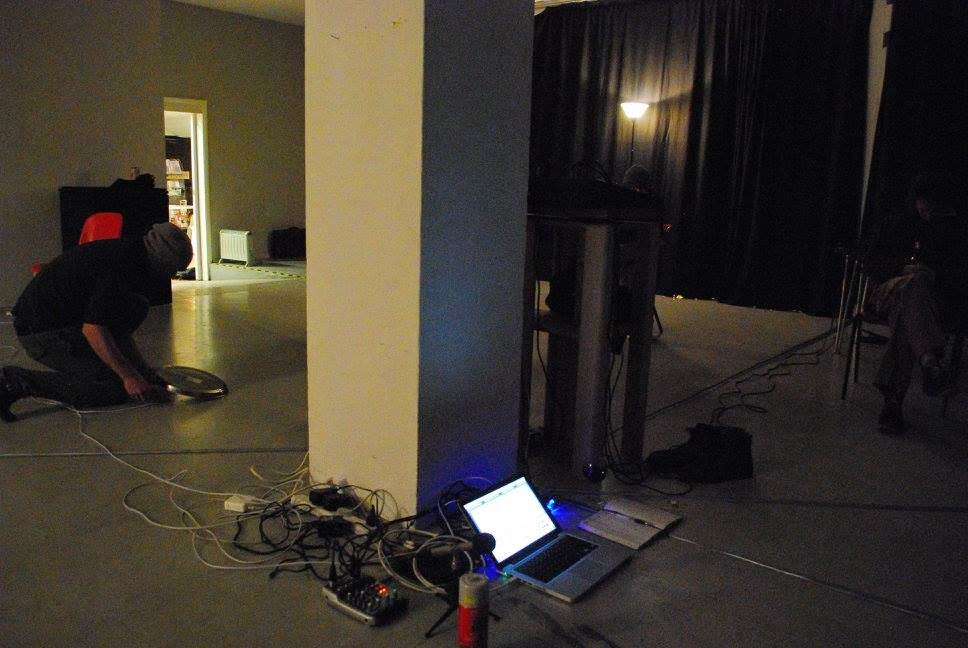 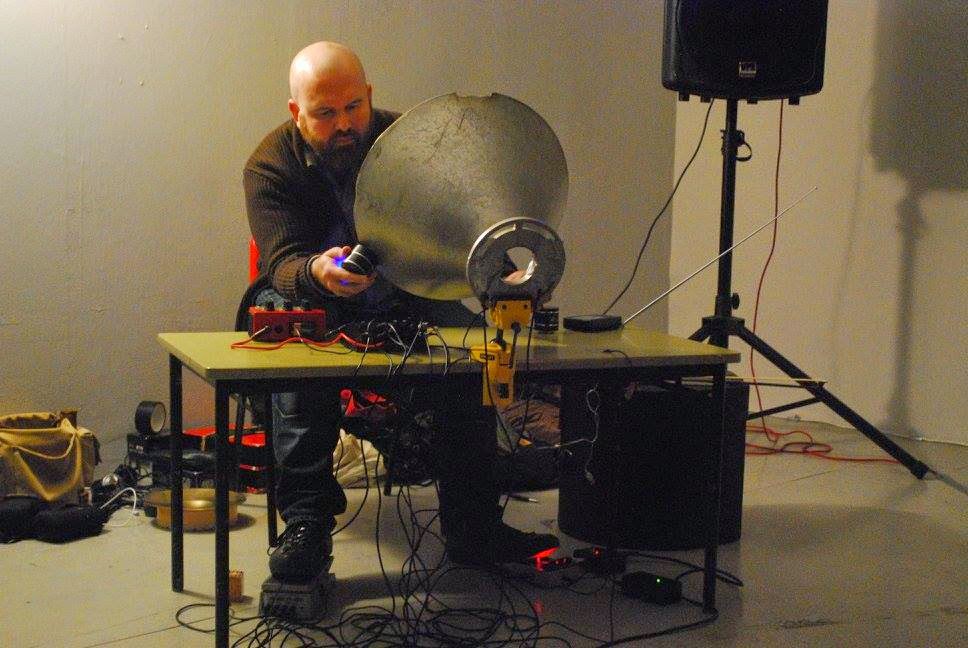 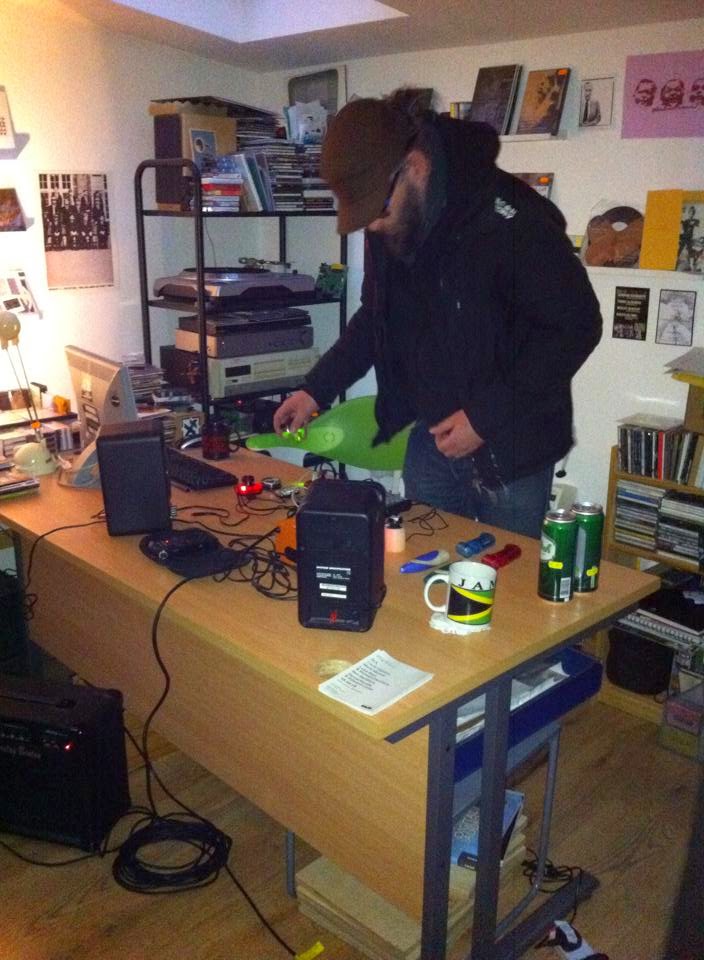 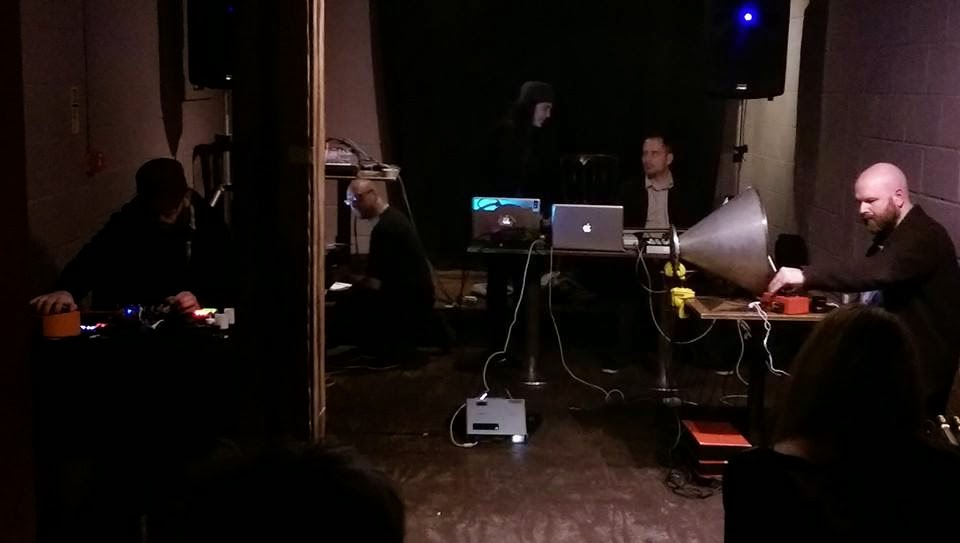 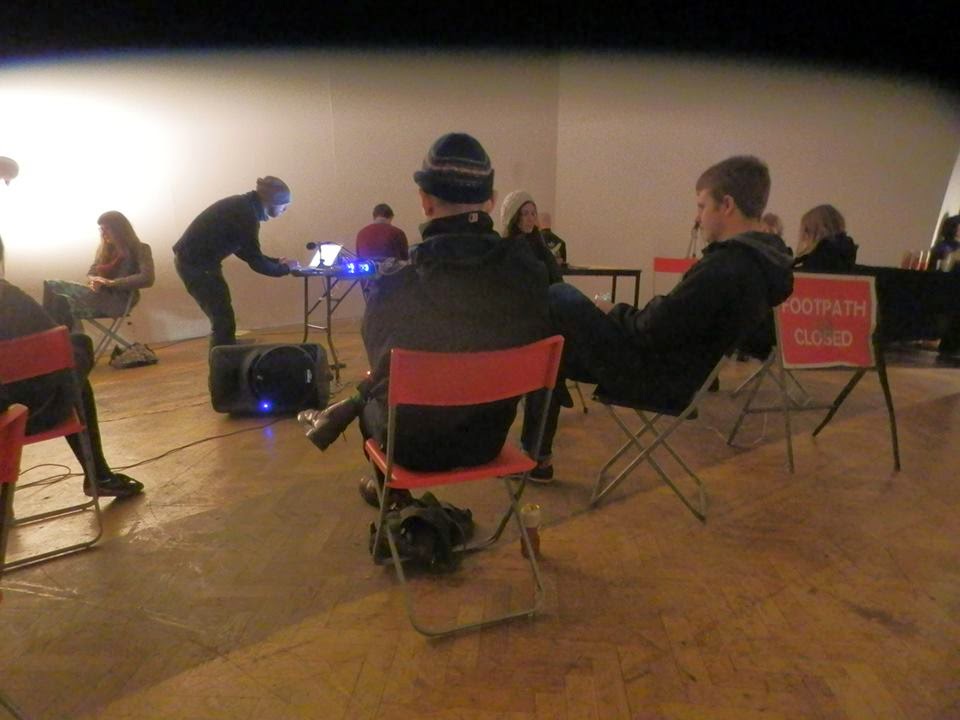 Simon Whetham at A&E, The Island, Bristol
photo by Henry Liam Collins
Posted by aural detritus at 14:04 No comments: 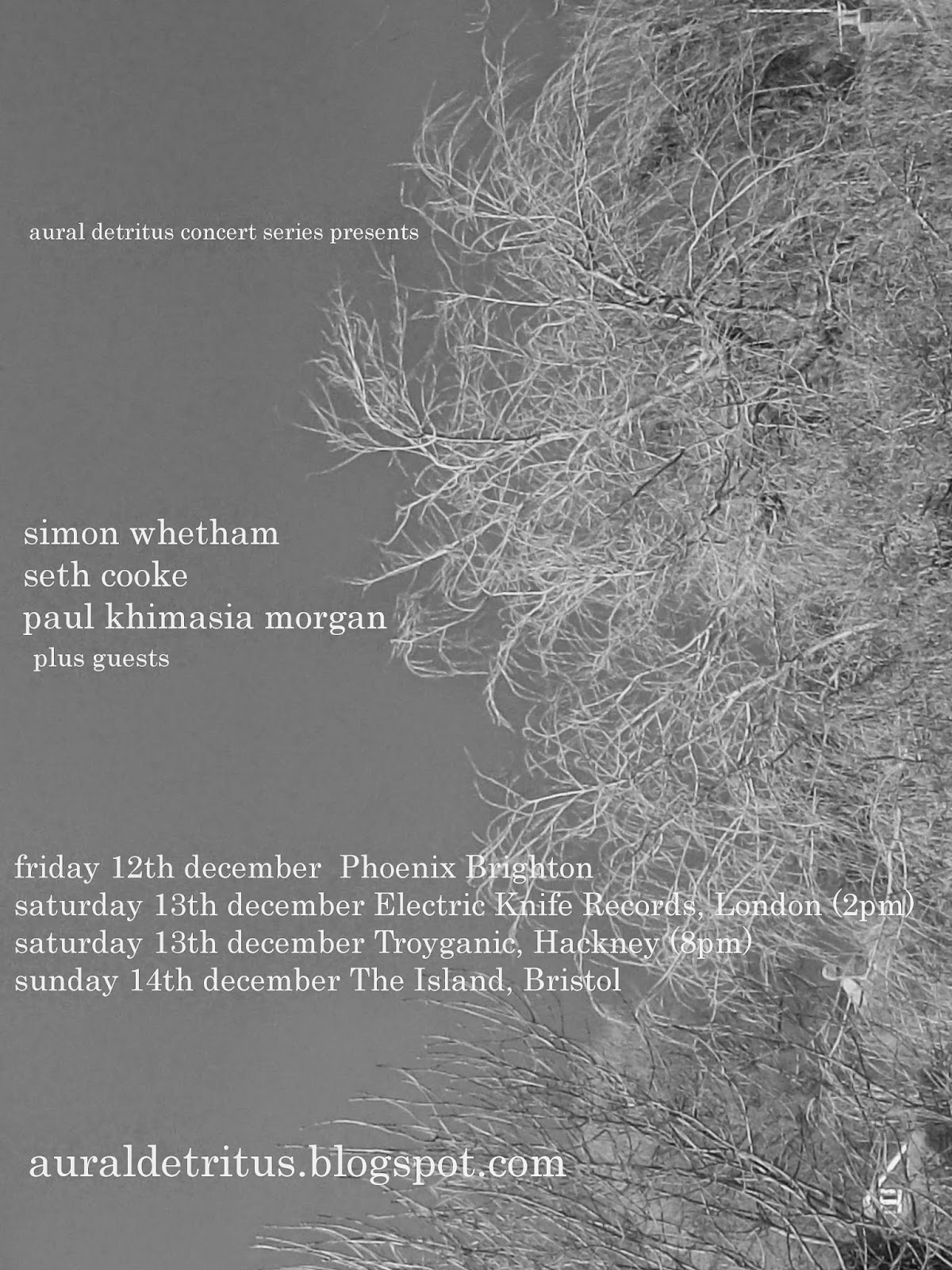 Posted by aural detritus at 04:32 No comments:

Activating objects and surfaces with found sounds and actions, Simon Whetham creates a shifting sonic environment that is comfortably disorientating.  Simon has been capturing and composing almost primarily with field recordings since taking part in a research trip to Iceland in 2005.  He was invited to participate in two residencies at the Art Container in Tallinn, Estonia, the second to compose new work, collaborate with other artists using sound and run deep listening, field recording and composition workshops.  This residency resulted in ‘Active Crossover’, a touring exhibition and exchange project.
http://www.simonwhetham.co.uk/
Seth Cooke is an improviser and sound recordist.  His music is frequently location or process oriented and he often works with material happened upon by chance.  As a percussionist he plays traps and waste disposal sink.  Cooke runs the Every Contact Leaves a Trace CDr label.  He co-founded Bang the Bore with Clive Henry in 2009, Place of Safety with Henry Collins in 2013 and Several 2nds in 2013.
http://www.sethcooke.eu/
Paul Khimasia Morgan is an improviser, currently working with electronics, zither and the sonification of low voltage.  Paul’s music has been released on Absence Of Wax, Engraved Glass, Con-V and Cronica.
"…a weft of mysterious hums and clicks that creeps organically across the intervening space between the speakers and my ears, never quite identifying itself but always offering tantalizing glimpses…” - Brian Olewnik, Just Outside

Posted by aural detritus at 02:53 No comments: 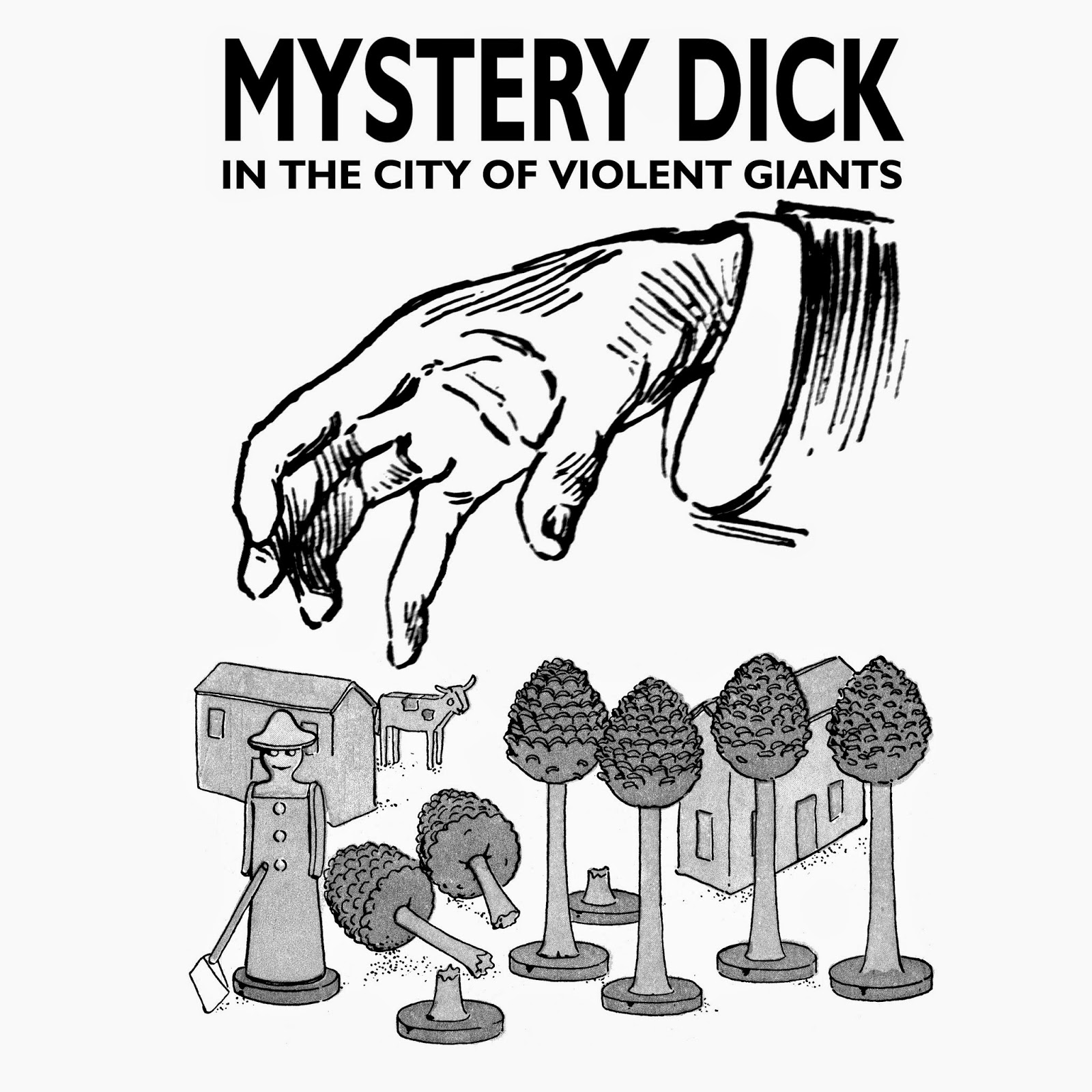 Recorded at aural detritus concert series May 2012 at Phoenix Brighton.
cd-r in 7" sleeve
Edition of 50 units. 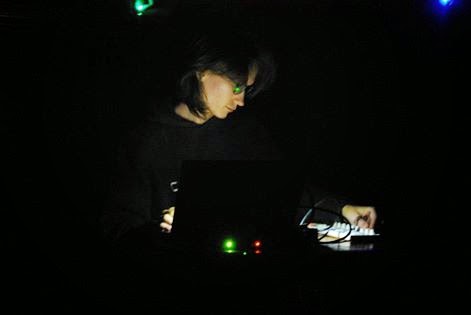 Many thanks to Tim Blechmann for his superb immersive performance last night.  Also thanks to Daniel Jones who performed solo for the first time in four years and to all of you who attended, we look forward to seeing you again at the next concert!  And thanks to Andrea Shamlou for the photograph of Tim above.
Posted by aural detritus at 01:10 No comments: 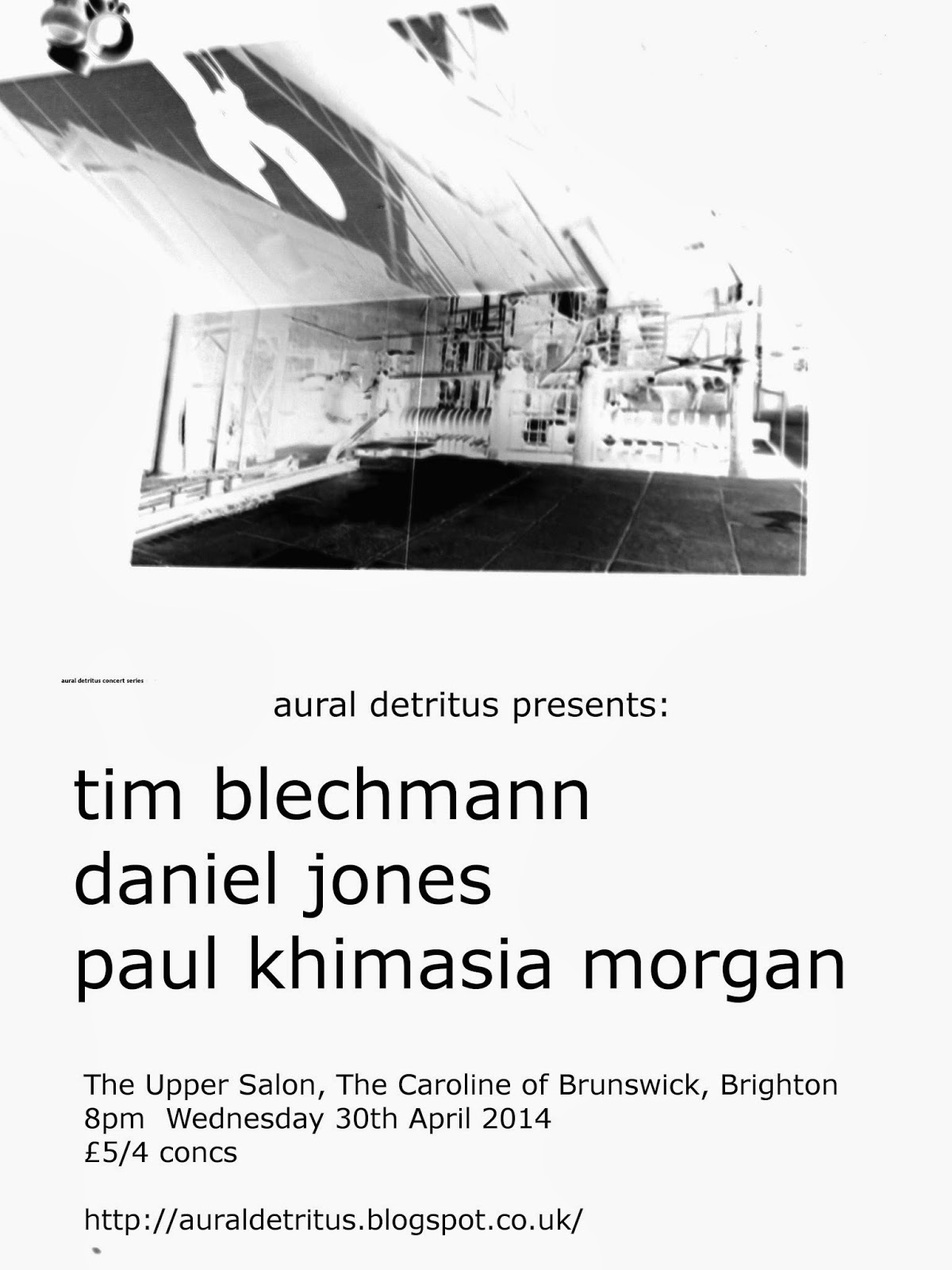