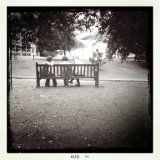 Only the second meeting of this trio, the first occurring over a year ago at an event in the Hackney based, gallerie8, where they realised a section of the graphic score, entitled Mudai#1, by Toshi Ichiyanagi. This event sees them realising a text score entitled, "To restore silence is the role of objects", by the young American composer Sam Sfirri, a member of the Wandelweiser composers collective.
The title of this piece is a direct quote from 'Molloy', a novel by Samuel Beckett, and as such, sets the three of them flirting around a convergence of impish hush and indeterminate assemblage.
Photograph by Richard Pinnell.

Bevan has toured extensively throughout Europe and North America, appearing with numerous European and American musicians (particularly Americans, such as Joe Morris, Barre Phillips, Jeb Bishop, Michael Zerang, Chris Corsano, Marc Ribot, Henry Grimes, Sonny Simmons, Bobby Few, Odean Pope, Sabir Mateen, Damon Smith,) as well as featuring in legendary drummer Sunny Murray’s European trio. This group, established in 2004, has now released four recordings (“Home Cooking in the U.K”, “The Gearbox Explodes!”, “Boom Boom Cat” and “I Stepped onto a Bee”) and featured in the celebrated documentary on Murray, “Sunny’s Time Now!”. Bevan was also in Murray’s Big Band (also in the film).  Bevan and Murray continue to play and record together.
The other major figure in Bevan’s musical life was the late, great Derek Bailey. Bevan appeared many times with Bailey's Company , and released his first CD (“Original Gravity”) on Bailey's Incus label. A further record on Incus,  “Bigshots” with bassist Paul Rogers and percussionist Steve Noble, was released in 1992. He continued to play and record with Derek until the Guitar master’s untimely death in 2005, recording in duo (“Under Tracey’s Bed”), in Derek’s group Limescale, with Otomo Yoshihide (“Good Cop Bad Cop”), and with Bruise, Bevan’s own group.
Tony runs the Foghorn label.
“The world’s greatest improvising Bass saxophonist”  (Timeout). 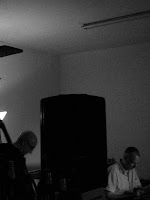 “...yet tribal loyalties were to be rent asunder because my favourite act were The Static Memories, who I could easily believe had been playing together since they were embryos. Their set was forever stuttering, building up and breaking apart again, but in a way that somehow sounded part of the plan. (Even though, clearly, there was no plan!) Even in it's quietest, most fractured-sounding moments it held the room, pulling at our attention like a super-magnet in a room of steel screws. It seemed the very opposite of virtuoso show-off music, where all egos were subsumed and creativity made a force for the common good.”
- Gavin Burrows, Lucid Frenzy
Dan Powell & Gus Garside have been working together on improv project The Static Memories for the last four years.
Dan Powell (laptop/guitar/sampler/effects) began making sound for installation works in London in the mid 90's and was involved in live arts group OMSK. Since moving to Brighton in 2000 he has concentrated on experimental and improvised music.  He is a member of Brighton based collective The Spirit of Gravity and has performed across the UK. Dan is also a member of free improv duo Nil with Chris Parfitt.
Dan has released work on net labels Hippocamp & Wrong Lab and his work has been played on WFMU, Radio Reverb & BBC Radio 3.
Gus Garside (double bass/electronics) has worked in a variety of musical settings – jazz, contemporary music, pop, cabaret, dance, theatre and, most importantly, improvised music where he has performed with many leading players.  Gus formed arc in 1988 and their third album "the pursuit of happiness" was released on Emanem Records in 2009.  He formed In Sand in 2004 and their first album “Whatever” came out mid 2008.
Gus is part of the Brighton Safehouse collective.  He has collaborated with a wide range of improvising and contemporary music players and dancers and frequently works with laptop musicians and also performs solo.
“…where he differs from the average jazz bassist is in the range of sonorities he conjures from his instrument” Penguin Guide to Jazz on CD 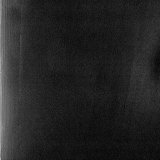 mass is noise, accidentally colliding and sometimes coalescing.
MASS is music to the ears, if you have tinnitus.
MASS cannot agree on what they are.
Mass have content but no purpose.
Mass are vague but focussed
Mass appear to them to sometimes sound like the numbness of content
Mass ARE. 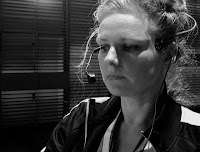 “In following Garrelfs’ vocal project, and the abstracted processing that in the end comes to release the voice into new configuration, I’m also led to hear her work as giving new sensuality to the electronic body.”  - Brandon LaBelle, 2011
Iris Garrelfs is a composer/performer intrigued by change, fascinated with voices and definitely enamoured by technology. She often uses her voice as raw material, which she transmutes into machine noises, choral works or pulverised “into granules of electroacoustic babble and glitch, generating animated dialogues between innate human expressiveness and the overt artifice of digital processing” as the Wire Magazine put it.
Moulding complex sonic collages, her work has been compared to artists such as Yoko Ono, Henri Chopin, Joan La Barbara, Meredith Monk and Arvo Part and featured in exhibitions and festivals nationally and internationally, including International Computer Music Conference (NY, 2010), GSK Contemporary at the Royal Academy Of Arts (London 2008/09), Gaudeamus Live Electronics Festival, (Amsterdam 2007), or Visiones Sonoras (Mexico 2006). She is collaborating with Thomas Koner in his Futurist Manifest and works with the audio-visual Symbiosis Orchestra in Italy.
Now in its 16th year, Iris is one of the founding directors/curators of Sprawl, advocating experimental sound through live events and recordings, which has seen collaborations with the Tate Modern, the Goethe Institute featuring internationally renowned artists such David Toop, Vladislav Delay, Pole and many more. She is currently an AHRC PhD research fellow at LCC in London where she also teaches on the BA Sonic Art. In a previous incarnation as photographer, Iris has been published by magazines such as The Wire, Mary Claire and others.
www.irisgarrelfs.com
photograph by Mario Radinovic 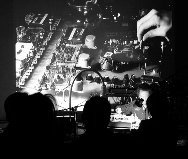 Stephen's artistic practice stems from an abiding fascination with consumer audio electronics: how these devices that we are sold to consume music increasingly frame our engagement with the auditory world at large. Reconfiguring these media from the inside, re-imagining their functionality, defying their obsolescence and searching for their intrinsic poetry are for him strategies with which to challenge normative use, social conformity and the myth of technological progress. Stephen's work inhabits both gallery and gig, taking the forms of kinetic installation and process-based performance by turns, always searching for situations in which the material; whether solid, spatial or sonic; controls the outcome as much as he does. He also works as an improvising musician and has established ongoing collaborations with Samuel Rodgers, Ben Gwilliam and Patrick Farmer & Sarah Hughes.
Stephen is currently a Research Fellow at the Sound Art Research Unit of Oxford Brookes University. He studied sculpture at the Slade School of Fine Art before completing a Masters at Dartington College of Arts. His work has recently been included in a large retrospective of Sound Art at the ZKM Center for Media & Art in Karlsruhe, and in the Mediations Biennale in Poland.

For many years, Paul Khimasia Morgan has been developing his approach to improvised music and has utilized a variety of techniques and instruments.  Currently, his practice combines electronics with amplified natural and man-made objects.
He has worked on projects with Simon Whetham, Daniel Jones, Joseph Young and Adam Lygo and has releases on Con-V, Engraved Glass, Cronica and The Sound Projector.
Paul also runs the imprint; The Slightly Off Kilter Label, which publishes artist-led short-run vinyl and cd-r editions alongside occasional publications including six issues of Honest Music For Dishonest Times zine and a forthcoming book of his own photographs.
The newest batch of releases on TSOKL include work by Daniel Spicer, Noteherder & McCloud, Best Left Alone, Bolide and a compilation of recordings from Joseph Young’s exclusive 2011 headphone concerts entitled Gold Dust..
Paul Khimasia Morgan is the curator of aural detritus concert series.
Photograph by Richard Pinnell 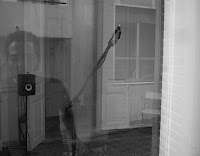 Kostis Kilymis is an artist focusing on audio feedback systems and representation. His practice touches upon music, installation work and video – developed using a mixture of electronic and acoustic approaches. In performance, he has collaborated with various musicians such as Lucio Capece, Nikos Veliotis, Leif Elggren Giannis Kotsonis, Sarah Hughes, Phil Julian and Patrick Farmer. He also runs the Organized Music From Thessaloniki music label.

Chris Parfitt (Noteherder) and Geoff Reader (McCloud) have been working together for 5 years in a monochrome haze of gnarled electronics and soaring soprano saxophony. Their main interests in this project are: investigating the sonic environment they've made available to themselves, wearing grey suits and watching old detective films.  As often as possible they work with visual artist Bartosz Dylewski whose _minimalVector software has given them some distinctive dynamic projections and taken them to the gallery at The De La Warr Pavilion, The Shunt Lounge and resonance fm.  They may well have two cd's and a 45 before the year is out. 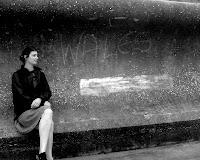 Angharad Davies is a violinist based in London. She is an active performer in contemporary, improvisation and experimental music both as a soloist and within ensembles.
Since making London her base in 2002 she has developed a specific approach to the violin, extending the sound possibilities of the instrument by attaching and applying objects to the strings or by sounding unexpected parts of the instrument's body. She is dedicated to exploring and expanding sound production on the violin. 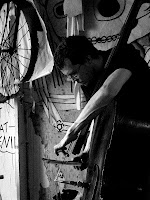 Dominic Lash is a double bassist and composer active in improvised and experimental music. He has performed with John Butcher, Tony Conrad and Joe Morris.  Resident in Oxford for a decade, he spent much of 2011 in New York and has recently relocated to Bristol.
Notable activity over the last two years has included duos with Rhodri Davies, Evan Parker, Michael Pisaro, Fay Victor, Alex Ward and Nate Wooley; tours with the Convergence Quartet and two different Diatribes Quintets; the Amplify (New York) and Just Not Cricket (Berlin) festivals; and CD releases on the Another Timbre, Babel, Estwhile and Psi labels.
www.dominiclash.co.uk

Sarah Hughes is an artist and musician currently based in the UK.  She plays zither and piano in improvising groups and as a founding member of the Set Ensemble, a group of musicians dedicated to the performance of contemporary composition.  She performs with long-term collaborators Patrick Farmer, Daniel Jones and Stephen Cornford, as well as various improvised groups.  She has performed  throughout the UK and Europe, and has participated in various international festivals such as Blurred Edges in Hamburg and i and e in Dublin.
She is the co-founder of Compost and Height, curating projects such as Michael Pisaro's Only [Harmony Series #17]  and the current Water Yam Project and is editor of the Wolf Notes journal.